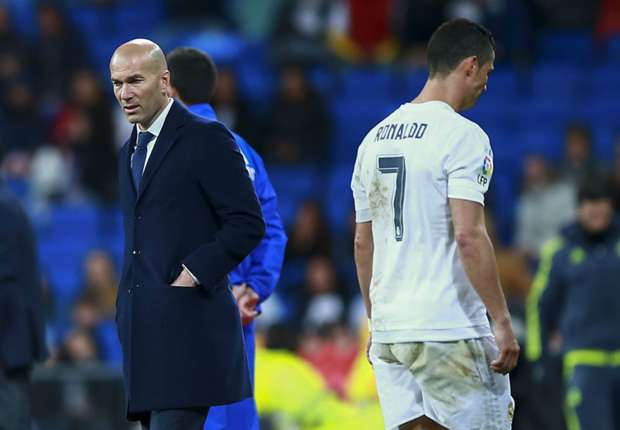 Real Madrid have confirmed that Cristiano Ronaldo has suffered a thigh strain injury, meaning he is now a doubt for their trip to Manchester City in the Champions League next week.

The Portugal star took himself off the pitch towards the end of the 3-0 win over Villarreal on Wednesday, clutching the back of his right leg.

Head coach Zinedine Zidane said he had no concerns that the injury could be a serious one, while Ronaldo himself took to Instagram to announce he was “all good” after the incident.

Madrid have now said that medical tests conducted this week have identified muscle damage, though they are unsure how long Ronaldo will be out of action for.

“After the medical examinations conducted today [Friday] on our player, Cristiano Ronaldo, a the Hospital Universitario Sanitas La Moraleja, he has been diagnosed with a muscle strain in his right thigh,” a club statement read.

“His progress will be monitored.”

Ronaldo, who has not missed a minute of La Liga or Champions League football this season, is now likely to be rested for Saturday’s clash against Rayo Vallecano, while he could also miss the first leg of the Champions League semi-final with Manchester City on Tuesday.

Portugal coach Fernando Santos is understood to have spoken to Madrid, but is not concerned that Ronaldo’s place at Euro 2016 could be jeopardised.

“I took care to learn of Ronaldo’s condition,” he said. “The information I have is that the probability of it being something very serious is small, thankfully.”

Ronaldo leads the race for the Pichichi top-scorer prize in La Liga with 31 goals one ahead of Barcelona’s Luis Suarez and has scored 47 in all competitions this season.