This week was one of twists and exciting turns, as seven bands battled for their spot on the Trophy Extra Special Band semi-final stage and the chance to win the grand prize of ten million naira! But, the biggest surprise did not come from the bands.

That’s right! This week, Judge Made Kuti opened the floor with an exhilarating performance that got everyone grooving and the bands wishing they did not have to perform after his electric rendition.

But, perform they did, as they had to deliver on their interpretations of the reggae theme for the week.

As usual, some bands blew us away, and some left us wanting a little more. Berry Tunes opened the competition with a fantastic reggae version of Wizkid’s Joy. The judges loved it, the audience loved it, and the hosts loved it, but there were slight corrections here and there on how they could have made it better. Notwithstanding, they were one of the top performers of the night.

Next up was Zenith Band, who tried to bring a new dimension to Oxlade’s Ojuju. The judges were of the opinion that their rendition “sounded like reggae, but it was not reggae!” Judge Made, however, offered them a moment of redemption when he said, “I think, considering the time you had to work on it, it’s nice. I felt like given the opportunity, you’d have done a lot more with the music.”

More bands — Alba Group, Alatika Band, Max Music and the Coloz Band — performed and got either encouraging or crushing comments from the judges, but the band that stole the show and blew everyone away was the Vibe6 band. Indeed, they understood the assignment and totally killed their rendition of 2Baba’s Be There. Infact, they were so good that 2Baba and Cobhams gave them the Extra Special Buzzer. 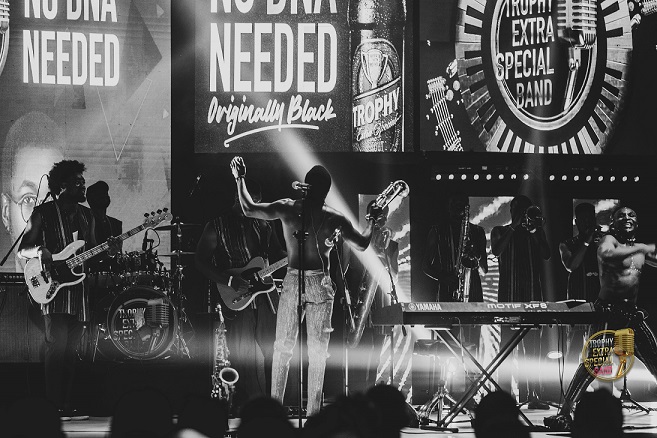 “This was a concert. This was a performance. This was explosive. After your very somehow performance last week, everything about your show was on fire,” 2Baba said on Vibe6’s performance. “Vibe6, if there is ever a day to go home, it’s not today,” added Cobhams.

At the end of the day, Max Music got eliminated because, as Cobhams said about their performance: “We were looking for reggae, authentic reggae and I didn’t think it was reggae intrinsically. It was a jam session. The audience enjoyed it and I enjoyed it, but it isn’t what we are looking for.”