‘Fees Must Fall’ is the slogan on the lips of South African students as they have promised to continue their agitation for free education. Although the nationwide protests embarked upon by the students have subsided after President Jacob Zuma announced a zero-percent increase in tuition fees for 2016.

The students’ protest which is requesting that free quality education be introduced and institutionalized racism abolished was triggered by university plans to raise tuition fees for 2016, ranging from 10 to 50 percent.

The protests have witnessed violence in several parts of the country, notable one is on Friday, 23rd October, when crowd of students converged outside the Union Buildings, the seat of government in Pretoria. Police used tear gas, rubber bullets and stun grenades to disperse students trying to storm the Union Buildings. Seven students have been arrested, police have confirmed.

After a meeting with university vice-chancellors and leaders of the students, President Jacob Zuma announced that there would be a zero percent fee increase next year. Despite this, many students refused to return to class until their demand for free education is met.

Meanwhile, the ruling African National Congress (ANC) has thrown its weight behind the students. While addressing students in Jeffrey’s Bay in the Eastern Cape Province on Sunday, ANC Secretary-General Gwede Mantashe said the demands of the protesting students were valid.

“We must be able to fund free education because it is not a cost but an investment into the future. Students are the future of the country,” Mantashe said. He added that the government has to make choices and will therefore identify areas where they are going to make choices and that there should be time frame for achieving the free education goal.

Mantashe also said that Zuma had announced the establishment of a task team to address students’ concerns, including free education and institutionalized racism. 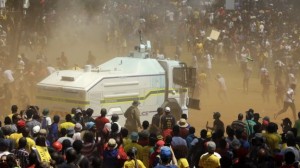 Free education is a promise made by the ANC. In its congress in 2007, the party made a resolution to have free education in seven years. The ANC has been criticized for failing to keep its promise.

Mantashe said earlier the ANC sympathizes with protesting students, but resources does not permit their demands.

“The ANC has promised free education and it must deliver its promise,” said Mcebo Dlamini, former president of the Students Representative Council in Witwatersrand University in Johannesburg.

Parliament’s Higher Education and Training Committee Chairperson, Yvonne Phosa said zero-percent tuition increase was an “essential building block” toward implementing a policy on free higher education for poor and academically deserving students. Free education have to be fast-tracked she said.

“We welcome the short-term solution as announced by President Zuma and also acknowledge that for the medium- and long-term, work is continuing in order for a sustainable solution to be found,” Phosa said.

She also noted that providing free tertiary education was a process and not something accomplished overnight. “It will be in the best interest of this country if this process is fast-tracked,” she said.