With a reputation to protect and a challenge to create the perfect balance between R&B and Hip-hop, award –winning Kenyan producer, Jazz Odongo got G2 from Mozambique and Uganda’s Navio hitting all the right notes in his mash-up of the South-East African hits, “Swag” and “Chigozzi”. 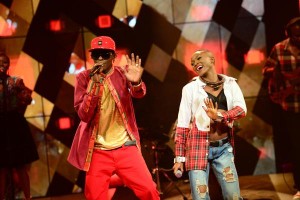 “This felt like a new composition to me, not a mash-up” rapper Navio remarked after the performance. “I could barely recognize my own work, with the exciting new elements added to the arrangement- the sound of a marching band and the gospel chorale at the end. It was awesome.”

Kevin Provoke, Chameleone and Eva Alordiah were handed the Coke Studio Unplugged task for episode 1, spinning undertones of smooth Jazz into the fusion of Eva’s “Sugar” and Chameleone’s “Valu”. The enigmatic Unknown Disc Jockey made his comeback in episode 1, working his magic on an eclectic mix of Highlife and R&B from M.I’s hit track “Bullion van” and Avril’s “Missing You.”

“I’m going to make the masked one talk”, M. I promised, but that did not happen, even after the thunderous applause that followed the “shoki” filled, hip wriggling performance by the duo from Kenya and Nigeria.

Cobhams made a re-appearance for a new twist to the show, joining forces with Tuface Idibia and Vanessa Mdee to put the lyrics to a high –octane new release, which got the studio audience dancing. 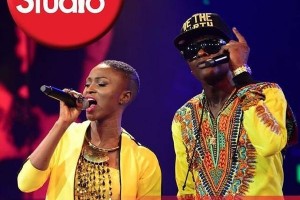 The beats will get faster and the atmosphere more electric as Episode 2 of Coke Studio Africa hits the TV screens this weekend. East meets West, as Juliana Kanyomozi and Flavour from Nigeria share one stage, with other live performances from Neyma and Olamide, Victoria Kimani and Alikiba and Hernani Da Silva and Aphrodija.

Download all the behind the scenes photos here http://we.tl/9V1SdERcsnhttp://we.tl/XuTUmRrCzV and give your favourite mash-ups a chance to get on the Coke Studio Africa album, by voting on twitter, Facebook and Instagram with the hashtags # song number and #cokestudioafrica.

Don’t miss out. Drink in the passion.