…Tasks Councils To Reposition Institutions As Foremost Citadels Of Learning

Lagos State Governor, Mr. Akinwunmi Ambode on Tuesday inaugurated the Governing Councils of the Lagos State University (LASU), Lagos State Polytechnic (LASPOTECH), Adeniran Ogunsanya College of Education (AOCOED), Micheal Otedola College of Primary Education (MOCPED) and the Lagos State College of Health technology, with a charge on them to work assiduously to reposition the institutions as foremost citadels of learning.

The Governor, at the inauguration ceremony, held at the Banquet Hall, Lagos House, Alausa, said his administration’s belief that tertiary institutions are critical in achieving economic prosperity, prompted the careful selection of diverse professionals from the academia, public and private sectors with proven track record and sterling antecedents, to manage the affairs of the state institutions.

“With this group of sagacious minds, there is no disputing the resolve of the state government to consciously build a new foundation for our tertiary institutions. The quality of leadership of the Governing Councils inspires confidence that the potentials of the institutions and their ability to rise up to the challenge of development will be unleashed”, he said. 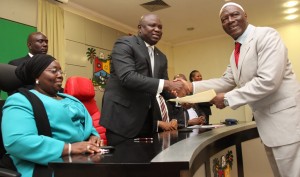 The Governor said the multifaceted problems and challenges plaguing tertiary institutions in the state could only be solved by taking concrete steps with the right people driving the process, urging members of the Council to see their appointment as a challenge and call to duty to bring back the lost glory of the tertiary institutions in the state by instilling discipline, integrity, accountability and responsibility in their affairs.

“As Governing Councils, you must be focused on the formulation of policies and programmes that will reposition the institutions to achieve their mandates of quality teaching, research and community relevance and service”.

“Your mandate is to ensure that relevant and appropriate measures are put in place for smooth and harmonious working relationship in the institutions. You are also to assist in setting the desired guidelines and pursuing relevant policies that will ensure academic excellence, standard in education, better learning and teaching environment, improved welfare for the staff, quality infrastructural development and effective management”.

He also charged them to uphold due process and respect for the rule of law in their official dealings with all facets of the institutions, adding that the issue of labour relations and clearance of all outstanding matters relating to staff is of utmost importance, especially issues relating to conditions of service.

He said the determination of the government is to develop the educational sector from the lowest to the highest level, assuring the Council members that the requisite tools and support needed to succeed will be made available.