Following the successful conclusion of the fifth edition of Airtel Rising Stars (ARS) U-17 tournament, the yearly football clinic organized for the most outstanding male and female players from the tournament, has commenced at the Teslim Balogun Stadium in Lagos.

Speaking on the Airtel football clinic, Managing Director and Chief Executive, Airtel Nigeria, Mr. Segun Ogunsanya noted that the football clinic serves as a platform to further develop the confidence and skills of the outstanding players discovered at the Airtel Rising Stars tournament with assistance of UEFA-certified coaches.

He said: “The football clinic is an additional support that the Airtel Rising Stars platform offers exceptional talent who are discovered at the finals. Through the clinic, these young boys are nurtured and exposed to international football techniques and standard, thereby creating a window of opportunities to help them realize their dreams.”

The two coaches, Jerino and Rob, both UEFA trained coaches, will mentor and engage the young players in intensive training during the clinic as part of efforts to help the players hone their football skills and also prepare them for professional football career. The youngsters will also be exposed to developmental football techniques, which border on positional play, how to play shots on targets as well as health and fitness sessions. 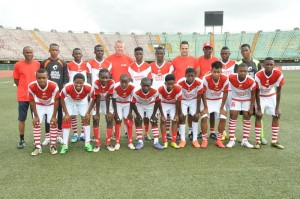 The football clinic is a part of the Airtel Rising Stars (ARS) initiative, which is aimed at providing a platform for UEFA-certified coaches to assist with training the exceptional and most outstanding players in every edition of the tournament.