The celebration started in 2019 when Governor Mark Dayton declared the 6th of October every year as the City’s Wizkid Day.

In the sealed and stamped document while declaring the day, the Governor noted that the recognition is in honor of Wizkid’s achievements in music and his role as a cultural influencer.

Wizkid was honoured after he became the first African artist to sell out the Skyway Theatre Minneapolis in 2019.

Since then, Wizkid has achieved greatly with his music including winning a Grammy-award in 2021, reaching the Billboard Top 10, selling out the prestigious 02 Arena on three consecutive nights, and winning a plethora of awards.

He recently received an RIAA platinum plaque for becoming the first and only Nigerian and African artist to have his album sell above 500,000 copies in the United States. 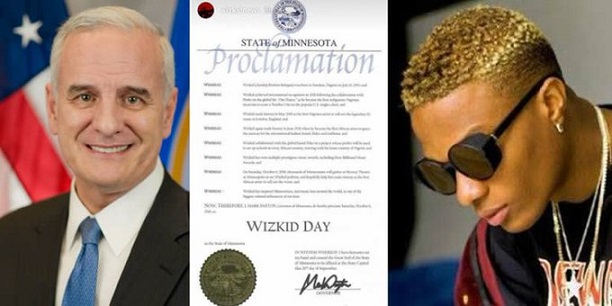