Reasons for the Peaceful Demonstration embarked upon by KASU Medical Students

The Medical Students of Kaduna State University (KASU) have stated that the lack of accreditation for the Clinical Studies department, which is due to the unavailability of necessary facility for the course which is results to their long stay in campus necessitated the peaceful demonstration the association staged at the Kaduna State Government’s House.

This condition has crippled our ambitions as young individuals striving to study and contribute our quota in making Kaduna State and the nation at large great again.

It is no longer news that the medical students of Kaduna State University have been stranded for years due to lack of accreditation of her medical faculty by Medical And Dental Council of Nigeria (MDCN).

This situation has resulted to the most senior class now being stranded in 300Level after spending FIVE (5) YEARS in the university.

The faculty is also currently faced with an ugly situation of having SIX (6) sets of students (including the newly admitted) spread across 3 classes all due to lack of accreditation. 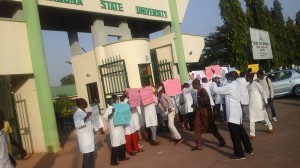 We have made efforts to draw the attention of the state government in different ways. Some among many of such measures are the presentations to various sub-transition committees, the peaceful demonstration staged by the students at the state secretariat on 9th September, 2015.

The students were attended to by the commissioners of Health and Education. A subsequent meeting was held on 11th September 2015 with representatives of the ministries, university authority, hospital management and the contractors handling some of the projects.

During these meetings, it was resolved that by last week of October, 2015, the Medical and Dental Council of Nigeria should be expected for an accreditation visit to the university. Like many promises in the past since the last administration, this was also not fulfilled.

Our hope is even more dashed by the apparent silence on this very important issue at public hearings and press conferences especially when issues concerning Education and Health are being discussed.

The recent pronouncement by this administration to select and sponsor 30 (THIRTHY) female students from across the state for medical studies abroad also calls for concern as to whether WE the medical students of the faculty of medicine Kaduna State University are of any value to the state. Though a commendable move, it has however rendered us hopeless as our situation seems not to be getting the necessary attention of the government.

It is however important to note that the Faculty has secured accreditation by NUC but that CANNOT still allow the students move on with their studies until that of the Medical and Dental Council of Nigeria (MDCN) is obtained which is of course much more difficult owing to the high demands by the MDCN as it is the official regulatory body for medical education in Nigeria.

The Faculty of Medicine Kaduna State University is composed of hundred percent indigenes of Kaduna State and Barau Dikko Teaching Hospital is the largest state own hospital in the state. These indices we expect should serve as the best and long lasting solution to the problem surrounding lack of qualified medical doctors in the state if given the priority it deserves.

Our future has been spelled doomed amidst these years of stagnation and frustration. We have explored all possible ways to draw government’s attention to our plight but it seems the problem keeps persisting.

We have hereby decided to stage a spontaneous peaceful demonstration until a state of emergency is declared on the crisis facing the Faculty of Medicine, Kaduna State University and the Barau Dikko Teaching Hospital and accreditation by the Medical and Dental Council of Nigeria is obtained.