Lagos State Governor, Mr. Akinwunmi Ambode has reiterated his administration’s commitment to use sports as a veritable tool that would not only take the youths off the street and provide them with a means of livelihood, but also boost tourism in the state.

The Governor made this known at the Lagos House Alausa when the Trustees and Management of Lagos Lawn Tennis Club paid him a courtesy visit.

He commended the club for sustaining the competition in the last sixteen years just as he expressed readiness to continue with the sponsorship of the Lagos Governor’s Cup Tennis Tournament and improve on the successes recorded in the past.

“I am committed to continue in the tradition of what has been done. I am also committed to make sure that I improve upon it and to let you quickly know that I would love to have this as part of the tourism calendar in the state. Not a mistake that I have a Permanent Secretary of Ministry of Tourism here. You have my commitment and I would ensure it is put in the calendar so we invite more people and expand it to become something we can all be proud of”, he said. 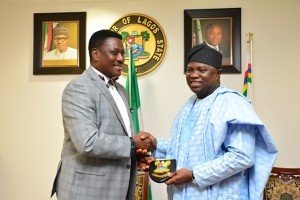 Governor Ambode also promised to use this year’s edition of the competition as a platform to celebrate the Club’s 120 years anniversary, adding that his administration intends to latch on to the potentials of sports and recreation to promote growth and position Lagos as a choice destination for tourists.

“I know what sport stands to do in solving some of my challenges in job creation. I am committed to it.  I am ready to combine this together with sports and recreation. At the end of it all, it increases our economic growth and our opportunities”, he said.

Earlier, the President of Lagos Lawn Tennis Club, Barrister Rotimi Edu, commended the passion and commitment of Governor Ambode towards the growth and development of the State, saying “the way and manner you are running a transparent government tends towards achieving a robust economy built on service, equity and justice.

He also solicited the support of the Governor for continued collaboration towards sponsorship of the annual ITF sanctioned Lagos Governor’s Cup Tennis Tournament scheduled to come up in October.

“It is our hope and conviction that Your Excellency will not only sustain the tournament, but will add further inputs to take the club to greater heights”, Edu said.

He also expressed willingness of the club to further collaborate with the state government towards the institution of a Youth Academy as a vessel for developing new talents and engaging the youth.